The macro control system is a handy and convenient way to create up to 8 controls that change multiple parameters of different modules.

It is inspired (read: stolen) by the way Ableton Live handles macro parameters in an Audio Effect Rack and might be an easier alternative to writing scripting callbacks for controlling multiple parameters.

if you're running HISE as plugin, you'll notice that the macro controls are published to the DAW as plugin parameters by default.

icon in the main topbar of HISE. It will open up the MacroControls in a popup that looks like this:

You can use the 8 knobs to change the macro controls, however there's nothing mapped yet, so they are disabled.
In order to assign macro controls, you just need to click on the edit icon next to the name (eg. Macro 1 ). The green outline around the macro indicates that now it is in edit mode so you can change the name by double clicking on it and connect controls to it: as soon as you touch and change a control, it will be deactivated and assigned to this macro control which is indicated like this:

You can remove a connection quickly by right-clicking on an assigned control and choose "Remove Macro Control ".

Each macro control can have an arbitrary amount of connections to module parameters. You can modify and remove these connections in the Macro Edit Table which will automatically show up in the right panel as soon as you're entering the edit mode for a macro control. 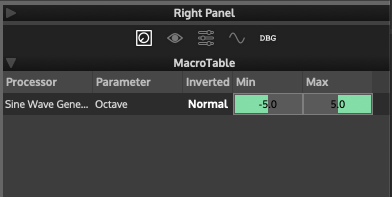 It is a table with a row for each connection that you've made for that particular macro control. It shows these columns:

If you want to delete a connection click on a row and press Delete . If you want to clear all collections at once, right click on the macro control knob and choose Clear Macro Control .

Controlling parameters directly is not the only way that the macro control system can be used:

The reason why you would want to use one of those is that they might result in a better sound when modulating the value, because they allow smoothing of the parameter.

Basically there are three ways of doing this:

You can hardwire a certain CC to control a macro control. The procedure is similar to mapping controls on your compiled project to a MIDI control:

From then on the macro control will be controlled by the MIDI CC until you remove it by right clicking on the knob and selecting Remove MIDI CC .

Be aware that this will "disconnect" it from anything else: it will not control the parameter assigned by the processorId and parameterId and the scripting callback will not be fired anymore.

If you want to have precise control when and what value you want to send to the macro control (or use a UI component which hasn't the correct range), you can use the scripting call Synth.setMacroControl to directly send the value to the given macro control.