When you create a new project, HISE will set up a directory with some predefined folders that will hold all the data, files and scripts that you need in your instrument/plugin.

These folders are categorized according to their filetype and usage: 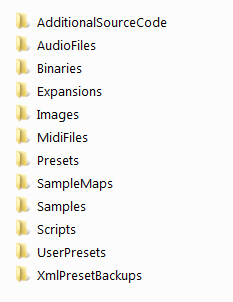 AdditionalSourceCode
The place for additional C++ files that are used in connection with the C++ API .

Contains single audio-files that can be used in the Audio Loop Player or the Convolution Reverb .

Contains the Source and temp folders that are necessary to compile your instrument. After compilation your exported plugins will show up here in a Compiled -Folder

A folder that can contain image files and filmstrips for usage in the interface designer as well as a few predefined hooks (e.g. splashscreen and fonts). Per scripting accessible via "{PROJECT_FOLDER}image.png" .

The Metadata files () in the projects root folder.

A folder for MIDI files used in the Midiplayer

Contains the HISE Preset files (.hip ), which are the save-files of your Projects plugin architecture. The auto-save files will also show up here.

When you mapped samples in the Sampler this folder will hold the SampleMap.xml 's that point to your samples.

The folder for your samples and the compressed .ch1 -monolith files.

If you create an interface for your instrument this folder will hold the main interface.js -file + all the scripts that you need for building the GUI and user-interactions of your instrument.

The folder for the User-.presets that can save different states of your instruments GUI. You can easily organize these with the Presetbrowser -FloatingTile.

The folder for your HISE presets human readable .xml savefiles.

During development, HISE will fetch all files from these folders. When you export a plugin or standalone app it will embed the data into the plugin and read it directly from memory.

But be aware that file-reloading is not always consistent: some files are loaded and cached on startup, some files are lazy loaded when you actually need them, and some files (you might have a clue which ones) are directly streamed from disk.

Note that you _can_ use files from outside the project folder, however it is highly recommended not to do this. The reason: you won't be able to transfer the project to another computer without breaking some links, let alone exporting the plugin and expecting the external resources to be resolved.

As long as way stay in the HISE Project paradigm we can use it's a relative path system to:

Oh, and samples that will be played through the streaming engine, will obviously also use this system. Two concepts are therefore fundamental to understand: File Pools and the Project Folder Wildcard .

There are a few data types (SamplePool , ImagePool , MidifilePool , AudiofilePool , SampleMapPool ) in HISE that use a pool system that caches loaded resources as long as they are used. These pools makes sure that you reuse internal data (so that when eg. two convolution reverbs use the same impulse response, they will use the same audio buffer in the memory).

Some file types are even cached from the beginning: They are loaded into the pool on startup and then the files aren't accessed directly anymore but the cached data is used instead.

This might lead to a few quirks that are often solved by restarting HISE after changing a file in order to use the updated version instead of the cached one.

There are multiple occasions in HISE where you need to use external resources, and all of them use the HISE project system - some of them (like SampleMaps) do this implicitely and you don't have to bother about how it works, but in some situations (mostly when using Scripting API calls that access an external resource) you will have to supply a String that is resolved to the desired resource.

For these situations you will need the Project Folder Wildcard : everytime you want to access a file inside the main Project Folder, just prepend:

to the relative path from the subfolder and HISE will resolve the resource automatically - for both files during development as well as for embedded data in the compiled product and across all operating systems.

Following the logic described above, you will need to use this wildcard:

There are two things that deserve some attention:

If you've read through the chapters of each folder, you'll notice that almost all data files use the XML data format. This has an important advantage: you can use your favourite text editor for batch processing files.

In the end, the HISE application is just one way of editing these files and depending on the use case, opening a text editor and doing search and replace operations will be highly more efficient (this will also enable you to work around some of the quirks of HISE). Especially when it comes to sample mapping, this is sometimes an invaluable tool.

You are probably wondering why the XML format was chosen over the JSON data format, which would be a suitable candidate given the scripting engine is built upon Javascript. The reason is compatibility towards a native binary tree data structure built into JUCE: the ValueTree . If you're not a hardcore C++ programmer, you don't need to understand the details of this implementation, just note that this binary data format comprises a convenient 1:1 translation into XML and is used all across HISE:

Although, there are a few situations where the XML data format and the JSON format are used at the same time (for example if you are storing objects as values for a ScriptPanel in user presets). This results in rather ugly constructs (a stringified JSON with lots of weird escape sequences) but is a necessary evil the for all the benefits we get from the ValueTree data structure.

If you're coming from a development environment like KONTAKT which puts all files into one big binary chunk, you're probably wondering about the rationale of such a system. The answer is simple. The binary/XML encapsulation permits compatibility with version control systems like Git. If you don't know what Git is, please take a few hours to learn about version control in general and Git in particular. This is a standard for any kind of serious software development and not using it deprives you of many advantages.

Having multiple files enables the version control system to track changes more precisely and simplifies simultaneous development: you can work on script files while another person is building the module structure or mapping the samples and you both will be able to commit your changes without conflicts (and even if you're working on the same file, in most cases the merge process is pretty straight forward because almost every data file is human-readable).